Study Material for Computer Fundamentals (Advanced) << Back to Exam

1. Computer: A computer is an electronic device that converts data into useful information. It can perform a sequence of operations on a given set of data(Input) and provide you output in a required format. There are two main aspects of the computer: 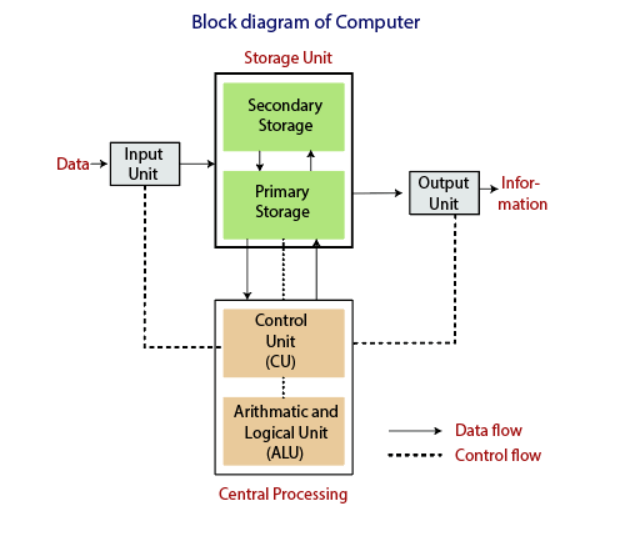 b)  Second Generation Computers: The period of the second generation: 1959-1965.

For example, IBM introduced its personal computer for use in offices, homes, and schools.

Macintosh was introduced by Apple.

6. Types of Computer: Computers can be classified based on their size and capability to execute instructions within a second. Following are the types of computers based on these factors:

a)  SuperComputers: The father of Supercomputers was Seymour Cray. These are extremely fast computers, they can perform quadrillion instructions within a second. They are mostly used in scientific and engineering operations where the processing is complex. They are used in weather forecasting, molecular modeling, gas and oil exploration, etc. Supercomputers have multiple processors which process multiple instructions at the same time. This is known as parallel processing. Examples, Summit, Sierra, Tianhe-2A, PARAM, etc.

c)  Mini Computers: Minicomputers are computers with one or more processors and can perform multitasking with high speed and storage capability. A minicomputer is a computer that owns most of the features of a large computer but is smaller in physical size. Minicomputers are mainly used as small or mid-range servers operating business and scientific applications. However, the use of the term minicomputer has diminished and has merged with servers.

d) Micro Computers: Microcomputers are also called Personal Computers. It is an electronic device that consists of Input-Output Devices, Microprocessor, CPU with some specified amount of memory. CPU can perform a large number of Arithmetic and Logical operations. These are standalone systems but you can connect your computer with the internet by taking services from any Internet Service Provider(ISP). Micro Computers include:

7.1) Hardware: It is the physical structure of the computer that is visible. It consists of Integrated Circuits (ICs), magnetic storage media, and other mechanical devices like input devices, output devices, etc.

a)  Input Devices: The physical components of a computer that helps the user to enter data into the computer are called input devices. E.g Keyboard, mouse, etc. Input devices are explained below:

7.2) Software: The computer hardware is itself not sufficient to do anything. Software is the program that runs on the hardware to perform the operations of the computer. The software tells the hardware what to do. Following are the types of software: 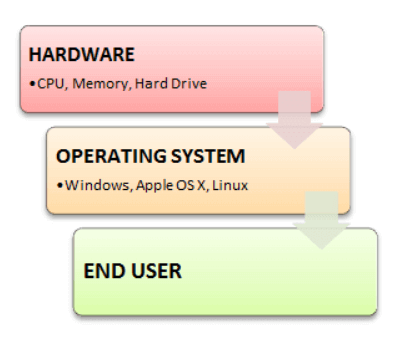 a) History of Operating System:

b) Types of Operating System: Following are the types of the operating system: 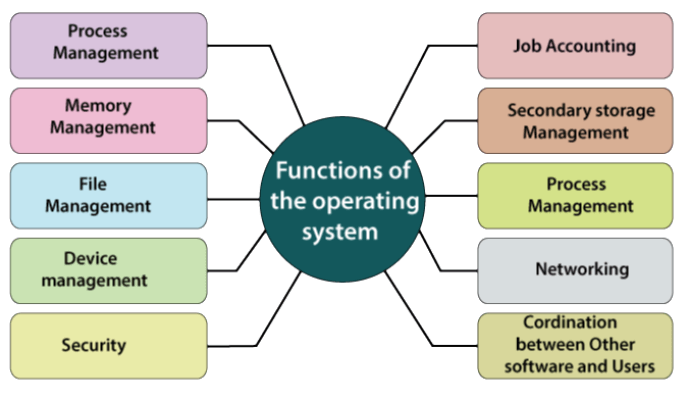 10. Network: A network consists of two or more computers that are linked promptly, share resources (such as printers and CDs), exchange files, or allow electronic communications. The computers on a network may be linked through cables, telephone lines, radio waves, satellites, or infrared light beams.

b) Data Flow in a Network:

c) Categories of network: Based on the size of the network, a network can be broadly classified as the following:

d) OSI Model: The OSI Model (Open Systems Interconnection Model) is a conceptual framework used to describe the functions of a networking system. In the OSI reference model, the communications between a computing system are split into seven different abstraction layers: Physical, Data Link, Network, Transport, Session, Presentation, and Application. The OSI model was published in 1984 by the International Organization for Standardization (ISO). Though it is not implemented yet but is used as a means to describe Network Architecture. 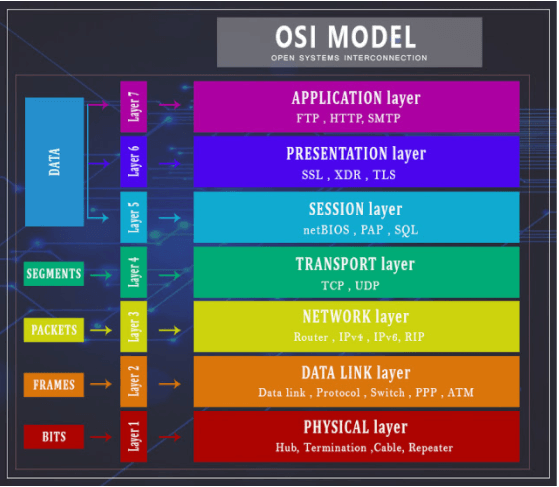 The functions of the data link layer are:

e) Types of devices used in the Network: In a network, several devices are used to connect computers and networks. Some of these devices are explained below:

a) System: The term system is derived from the Greek word ‘Systema’ which means an organized relationship among functioning units or components. A system is an orderly grouping of interdependent components linked together to accomplish some goals.

b) Characteristics of a System:

c) Elements of a System: A system has three basic elements input, processing, and output. The other elements include control, feedback, boundaries, environment, and interfaces. 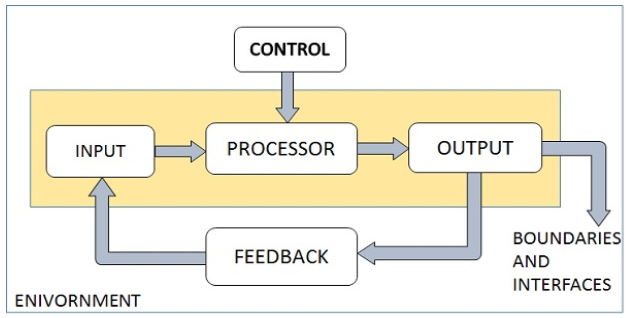 d) Types of System: The system can be divided into the following categories:

e) System Development Life Cycle: SDLC stands for Software Development Life Cycle. It is a systematic process to build correct and good-quality software to meet the needs of users. It aims to produce high-quality and cost-effective software in a predefined time. SDLC consists of a detailed plan which explains how to plan, build, and maintain specific software. Every phase in SDLC has its inputs and results produced in one phase will be the input for the next phase.SDLC is used by analysts to develop an information system. SDLC includes the following activities: 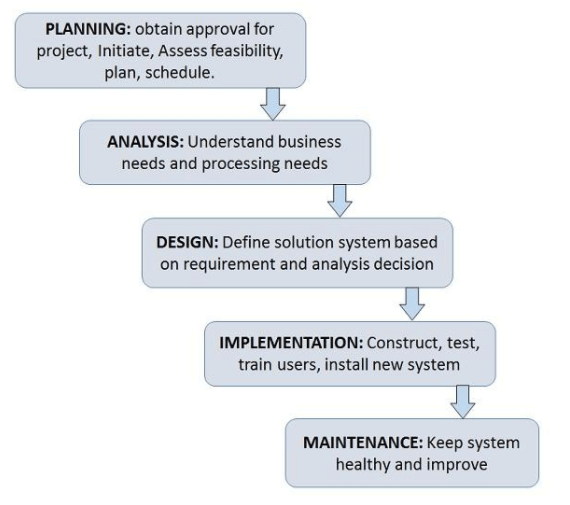 12. Database Management System: A database management system is a collection of related data and a set of programs for defining, creating, maintaining, and manipulating a database. It is a collection of data + management, i.e., to collect data from various sources and then manage that data in the form of a table for easy access of users.

a) Functions of DBMS:

b) Applications of Database Management System: 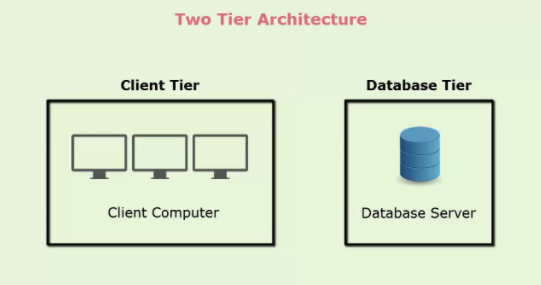 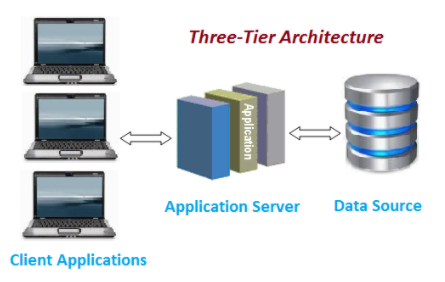